Home » Blog » What is Kinesiology? 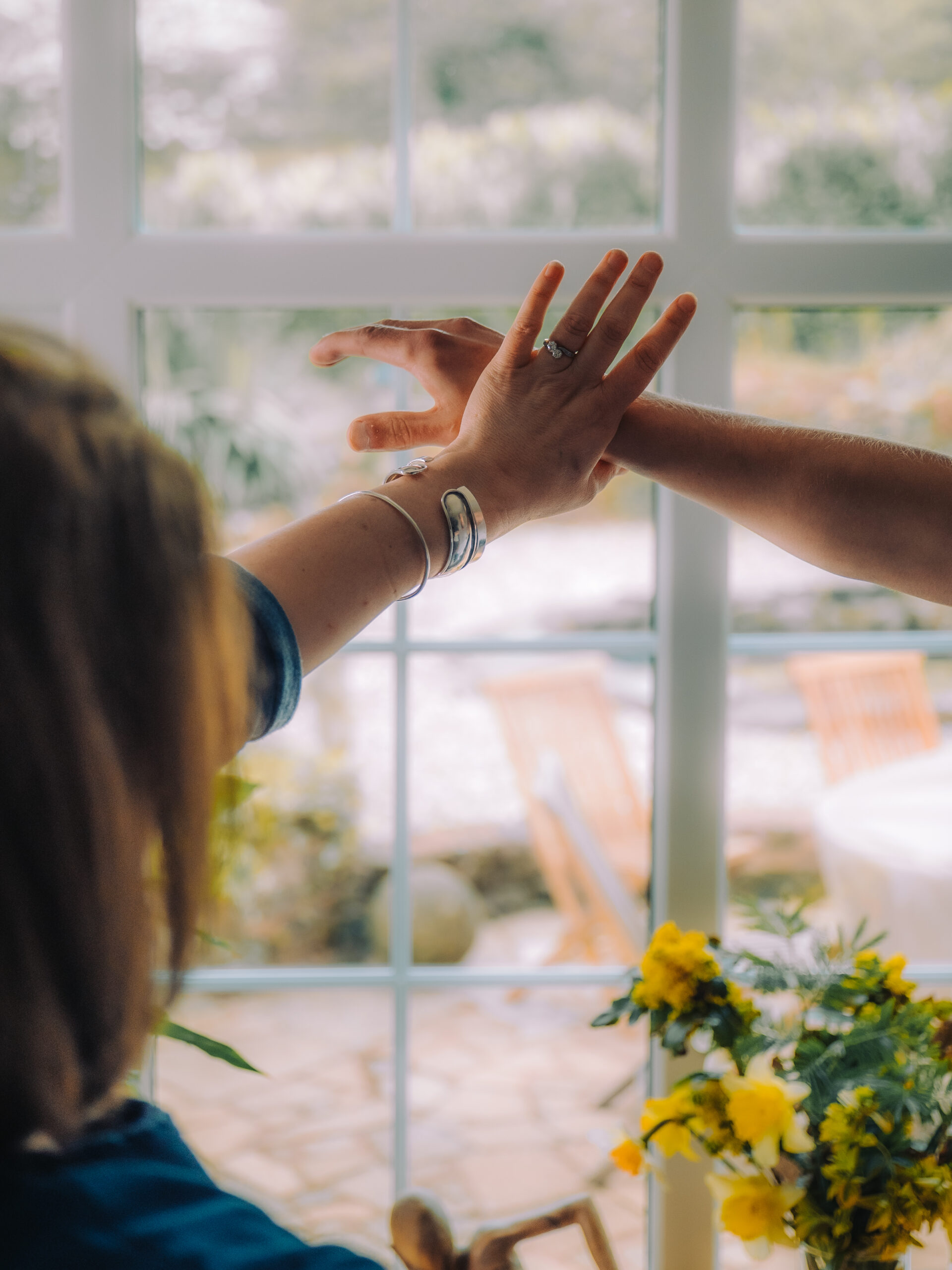 It is often the case that one stumbles upon a new direction serendipitously. Meeting an old friend for lunch in 2018, led unexpectedly to my introduction to Touch for Health kinesiology and an extraordinary opportunity to approach life from a holistic perspective.

It was a timely introduction. As I have written elsewhere, in 2018, I had found myself facing huge challenges caring for my elderly Father who had sepsis, not long after losing my Mother from a brain injury. Concurrently, I’d decided my professional role in academia no longer aligned with my values. Having made a huge decision to leave my academic role, I sat, over lunch, feeling disoriented, and a little adrift. My friend, a kinesiologist, told me about her work and how kinesiology is a gentle and supportive complementary health practice, which helps clients identify and resolve areas of imbalance in the body.

In many ways, the 10 years I’d spent trying to solve dilemmas of human existence with the ‘thinking mind’ had not served me particularly well. I had worked at a top university, within a well-respected history of medicine department – where many of us were charged with asking critical questions of medicine and health. However, the model of ‘wellbeing’ was still broadly dominated by the allopathic concept where the mind is understood to be separate from the physical body. My own experience was that people did not fare so well with this model. What I took away from lunch with my friend that day, was optimism and inquisitiveness, and a sense that there was an alternative way. And so, my journey began.

Kinesiology developed originally from the fields of orthopaedics and physical therapy. RW Lovett, a Boston orthopaedic surgeon, who invented the first turnbuckle brace for treating scoliosis, also used a technique called ‘muscle testing’ to analyse disabilities resulting from polio and nerve damage. Henry and Florence Kendall, two physical therapists treating polio patients at the Children’s Hospital in Baltimore, modified Lovett’s ideas and, in 1949 published a pioneering book Muscles: Testing and Function. Muscle testing became a ‘new science’ in the field of academic kinesiology. However, it was Dr George Goodheart, a Detroit-based chiropractor who is remembered for the body of work that became known as applied kinesiology. Goodheart increasingly used muscle testing in his practice and discovered that specific muscles often tested weak when certain disease conditions were present. It soon became evident to him that there was a relationship between organs and muscles, and, drawing on the research of other osteopaths and chiropractors, he developed reflex techniques working with congested lymph and blood flow. Finally, drawing on theories of meridian Qi (energy) from Chinese acupuncture, Goodheart incorporated the Chinese meridian acupressure system into his muscle testing technique. As Charles Krebs points out in his wonderful book Energetic Kinesiology: Principals and Practice, the ‘muscle-meridian-organ’ matrix, integrated an ancient system of Chinese medicine into modern western physiology, accessed through the unique feedback tool of muscle testing.

The Touch for Health model of kinesiology originated in 1970, when applied kinesiologist and chiropractor John Thie expressed the wish to empower people to use kinesiology to promote their own health. Dr Thie and his wife Carrie began teaching Touch for Health classes, and since this time, medical doctors, chiropractors, nurses and other health professionals have learned Touch for Health to enhance their practices. However, anyone can learn Touch for Health, either as a basis for a career, or to simply empower friends and family to foster good health.

As any kinesiologist will tell you: ‘You are your primary care provider’ and are best placed to assess your wellbeing within the context of your own life. The western medical model is inclined to encourage powerlessness and dependence on pharmaceutical prescriptions and surgical techniques. While we would all applaud some of this, the mechanistic model tends to underplay the ways in which we are all unique. It also separates the body from the mind. As I have written in another blog, medicine’s disease-oriented model emphasises intervention, instead of prevention. As Harriet Beinfield and Efren Korngold demonstrate in their beautiful book Between Heaven and Earth: A Guide to Chinese Medicine, ancient medicine embraces the concept of ‘balance’, maintaining order rather than correcting disorder. ‘Illness stalks when we are vulnerable; we need tools to enable us to withstand the storm without being disabled by it and to accumulate resources in times of good weather, peace and plenty’. Ancient Chinese medicine views human life as part of an unbroken wholeness, and fully integrated in the cycle of nature. The five-phases of Wood, Fire, Earth, Metal and Water encompass all aspects of inner and outer life: seasons, climates, emotions, sounds, colours, organs and muscles. Also central to Chinese medicine is the concept of Yin and Yang, which recognises that everything contains an opposite. The nature of the universe is dynamic and cyclical, manifest in seasonal and diurnal cycles of flourishing and withering. Our own lives too, are governed by this cyclical process of life and death, ‘becoming and decaying’, beginning and ending. In this way, change is expected and something to be embraced as opposed to feared.

Touch for Health kinesiologists work primarily with the muscle-testing (or muscle ‘monitoring’) technique, which gives biofeedback about the subtle energy systems in the body. Where imbalance is found, we use a range of balancing techniques to restore energy pathways in the body. These tools include neurolymphatic massage, neurovascular and acupressure holding points and meridian tracing. However, we also work with colour, sound, metaphors and food! A core feature of Touch for Health is the ‘self-responsibility’ mode, which empowers clients to make changes to choices, attitudes, actions and goals. Many of the techniques provide wonderful self-help tools to incorporate in daily well-being practices. We have a treasure-trove of simple balancing techniques for pain, stress and fatigue. These can always be used to augment treatment from medical doctors and other practitioners, should this be necessary.

I worked for many years in an environment dominated by theory and the ‘thinking mind’. Over this time, I became increasingly disconnected from my body. I taught modules and wrote books that were heavily influenced by the concept of social constructionism – a theory that posits there are no universal truths, and that the existence of anything hinges on the influence of the culture and society within which it exists. Of course, all ideas are, to some extent shaped by contemporary social conventions; however, my sense is that by denying the flow and rhythm of nature and its universal laws, we are causing much pain. In Chinese medicine all aspects of human health are connected to nature and our environment. However, in the west, our working patterns, social life and diet often resist or contradict the cyclical nature of the universe. Academic terms/semesters, for example, are at their most pressured during the late autumn at the beginning of a new academic year. However, the earth phase of Samhain (31st October) directs us to turn inwards and decrease the amount of energy we expend at that time of year. Similarly, the season of Christmas parties and frantic consumerism in December sits in stark contrast to the natural rhythm of Yule and the winter solstice – characterised by peace, stillness and reflection. Our diets are often processed and lacking in nutrients; our meals are rushed, and we have lost the art and joy of seasonal, locally sustainable food (although I hope this trend is beginning to reverse). Concurrently, western culture seems to disregard the importance of spirituality and instinct. Ancient medicine and Touch for Health kinesiology encourage you to reconnect with your intuition the natural rhythms that support wellbeing. The soul always knows what to do to heal itself. The challenge is to silence the mind.

History and theory taken from:

Harriet Beinfield and Efrem Korngold, Between Heaven and Earth: A Guide to Chinese Medicine (Ballantine, 1992)